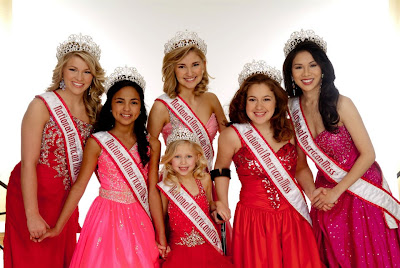 When 7-year-old Maddison Kott won the 2012-2013 National American Miss Princess title during Thanksgiving in Anaheim, Calif., her gown made most think of Belle, Disney’s princess from Beauty and the Beast, and her character replicated that of a Disney princess.

The Detroit native is a 1st grader at Grandview Elementary School and has a bright future ahead of her. Kott and her mother Tiffany, talked toThe Pageant Planet about National American Miss.

Megan: What is National American Miss?

Kott stands as final two during National pageant in Anaheim
Maddison & Tiffany: National American Miss is a wonderful pageant system that builds self-esteem, helps girls communicate and brings such a wonderful feeling to all the girls that compete.
Megan: Have you had any previous experience with NAM?
Tiffany: This was Maddison’s first year ever to compete in NAM. She competed at the state level with over 80 girls and was crowned in July 2012 as Miss Michigan Princess.
Megan: Did you compete in any optionals?
Tiffany: She competed in Top Model, Photogenic and Casual Wear Modeling. She won both Top Model and Casual Wear and 3rd runner-up in Photogenic at state.

Megan: What advice would you give to first time competitors?
Maddison: Be yourself and be confident. You should feel comfortable with yourself and that really comes off on stage. Don’t be nervous, just have fun and enjoy every moment during your time on stage! Shine, rock it!


to read the feature article in its entirety, follow this link below: 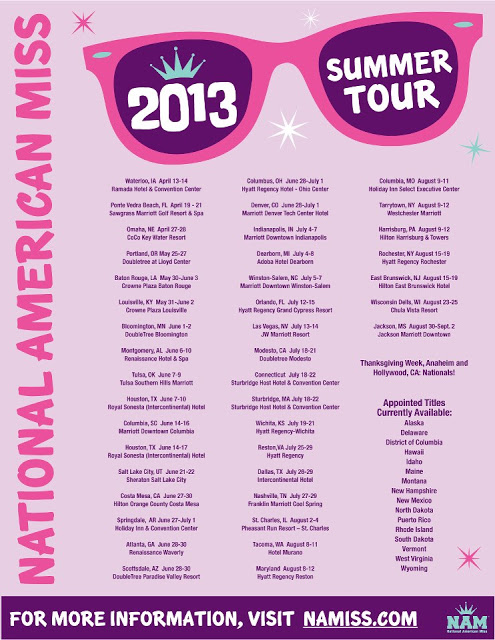 Here at National American Miss, we strive to make an impact on the lives of our participants. We hope that each NAM girl can go home with a sense of pride about who she is and what she wants to be someday. This is one of the greatest things about our program. While only one girl in each age division will walk away with a crown and banner representing her home state, National American Miss allows a multitude of outstanding leaders to go home and continue to shine in their local communities, long after the state competition has concluded. Marisa Pace did just this. Marisa was the MN NAM Jr Pre Teen 1st Runner Up in 2012.

After competing in Minnesota in 2012, Marisa went home and made a huge impact in her community. Her heartfelt plan to help children staying at the Lakes Crisis and Resource Center in Detroit Lakes has not gone unnoticed. Marisa's plan to warm the hearts of these children through her fleece blanket campaign was recently featured in the Detroit Online News. Way to go Marisa!! 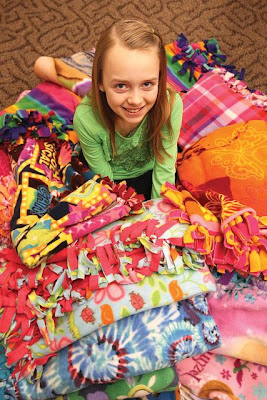 
Marisa's Feature in the Detroit Lakes Online
No comments: 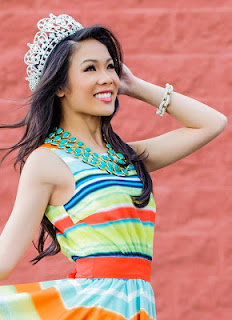 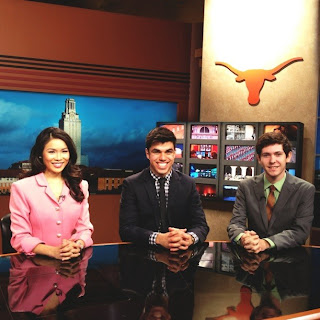 The current NAM Arizona Princess titleholder has been helping out her community in recent days. The Tucson Medical Center got word of this young lady's fabulous work, and decided to feature her on their website. An excerpt as well as a link from the article are included below. 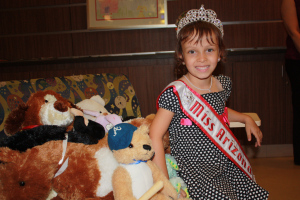 Children recovering at Tucson Medical Center will have more toys to pick from after a special delivery Friday by Gabriela Bustillos, the 2012 National American Miss Arizona; Princess Division.
The 7-year-old Gabriela, wearing the crown and sash she won in the June 22 pageant, distributed toys donated by pageant contestants.
“When children are sick, we want to help them get better,” Gabriela explained about why she wanted to donate toys to the pediatric unit at TMC for Children. She also distributed beanbag animals in the Newborn Intensive Care Unit.
It was a poignant homecoming of sorts, since the second-grader was born at Tucson Medical Center, and spent 12 days in the Newborn Intensive Care Unit after being born premature.
Gabriela had a chance to visit the bed she was in when she was little more than a handful, and gave a stuffed dog to a tiny boy.
“Wow! You get to wear a princess crown! Some girls are just so lucky,” exclaimed registered nurse Pauline White, while Gabriela’s mother, Melis Bustillos, confessed she and Gabriela’s grandmother couldn’t resist trying it on.
Gabriela told the nurses she was there “to help our community,” but also noted she’ll be going to Disneyland soon, since she’ll represent Arizona in her age division at the national competition in Anaheim in November.
Her mother, a kindergarten teacher, said the pageant helps build confidence in the contestants, since they have to introduce themselves to groups of strangers and demonstrate poise in an interview. She also had a chance to build on her talents, singing “Twinkle, Twinkle Little Star” in sign language.
“It’s been a real learning experience, and it’s really nice that it is able to help instill a sense of community service in children.”
To view the full article, follow the link below:
http://tmcaznews.com/2012/07/27/pageant-winner-7-distributes-toys-to-pediatric-unit-newborns/#comments
No comments:

Illinois Teen Queen Thanks NAM, Helped her to Prepare for Harvard Interview

Just recently, Summer achieved one of her biggest dreams--applying to, and interviewing at Harvard! Her ability to effectively communicate with her peers has certainly carried her far, and we can't wait to see what this fabulous lady has in store in the future!

Read about Summer's experience in her letter to National American Miss below:

NAM,
It was my first "big girl" pageant and I could not have been more excited or inexperienced! As a country girl from a rural town in Illinois my family and I's journey to St. Charles IL to attend the NAM Jr Pre Teen pageant in 2002 was one I will never forget. Although I arrived only expecting a fun experience I walked away with the title and an offer to attend Nationals. My year taught me  the importance of public speaking and the impact I could have on others even as a 9 year old. After my reign ended, my journey with NAM did not. I continued to compete for the system for 7 years placing in the top 5 six times and the top fifteen the remaining year. I was also fortunate to place numerous times in the top of the Spokesmodel, Actress, and Talent competitions. Again in 2012 I was fortunate to find the crown and compete at Nationals where I placed in the Top 10! My journey with NAM has been incredible and I am honored to have been both an Illinois Jr Pre Teen and Teen titleholder. Of all the amazing experiences that I have had with NAM my experience in an interview has been the most rewarding. Last week I was humbled to have an interview with the school of my dreams, Harvard! NAM has taught me the skills of confidence and poise and I put them to use in my journey finding my future college. I cannot thank NAM enough for everything they have taught me!
Summer Robbins
NAM IL Teen 2012 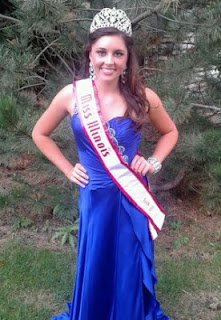 The American Girl Doll Fashion show celebrates the experience of being a girl, whether yesterday or today, through a colorful presentation of historical and contemporary fashions. The event benefits various Catholic Charities throughout Missouri, including the Delta Gamma Center for Children with Visual Impairments, the Ranken Jordan Pediatric Specialty Hospital, Rainbows for Kids, and The Saint Louis Crisis Nursery.

The fashion show also allows viewers and participants to learn how clothing has changed over the years to reflect history, culture, and girls' individual styles.

Tiffany made her own mark on the fashion show, helping prep the models and their dolls for the fashion show!  She also utilized her expertise by helping to ease the nerves of the young models!

To find out more about the American Girl Doll Fashion Show in Missouri please visit the website below: