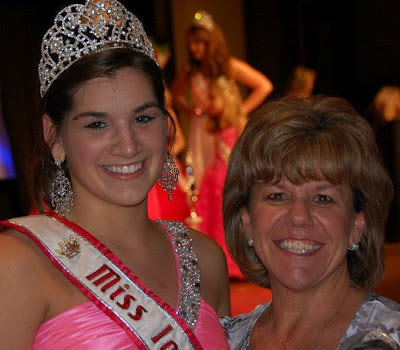 It’s April 2012 and the end is coming. What an awesome ride it has been! Jenny has only been involved with National American Miss for 2 years, but what an impact it has had on both of our lives. In 2010, her first year of competition, she won the Iowa Actress crown and finished 3rd. in the Talent competition sending her to Nationals in Hollywood! We packed up and spent 9 great days in Hollywood. What an adventure. We both met new people and made new friends and did things we’ve never done before and hadn’t even dreamt of doing. I’ve always been proud of my daughter. She has always filled my life with laughter and joy. After our first year of involvement with National American Miss I saw her self confidence grow. Her self confidence, courage to hold her head up high and stand up for herself and what she believed in grew! It was an easy decision in 2011 when she wanted to compete again. I was as excited as she was!

Jenny was crowned Miss Iowa Teen in July of 2011. Oh my gosh!!! We were all so proud of her. Tears of joy and pride flooded my eyes. The tears of pride have continued throughout the year. As I watched my daughter grow into a woman right before my eyes. All of the community service projects she’s been involved in from visiting Ronald McDonald House to providing books and bears at a children’s Christmas party for the Moose Lodge and of course the really fun stuff like riding in parades and being “Visiting Royalty” at the Miss Nebraska pageant. It has been 2 fabulous years! When people ask me how I feel about National American Miss, I tell them this, “I wish that every Mother and Daughter in the World could experience what Jenny and I have had these past 2 years. The memories we have made will carry with us for our lifetime.” I have not one complaint or insult.

I want to thank the Maples Family for creating such a wonderful environment for girls to be themselves and to express themselves. The confidence that this program instills in young girls is beyond explanation. Breanne, I especially want to thank you. Jenny has felt that you are a lifelong friend! I know that God made you especially for this purpose! When I watched you in Nebraska stand in front of those parents and speak while their daughters were with the judges interviews, I couldn’t help but smile and think how proud of you your parents must be. These girls all look up to you. Thank you for having such a positive influence on their lives.

So many people, Ryan, Molly, Julie…I’m just going to stop there because I’ll forget someone. I just want to say Thank you. Thank you for having such a wonderful impact on my daughter’s life.

We will both look forward to seeing you in 3 weeks and dread saying good-bye. It will be a weekend filled with mixed emotions. Just know that we will never forget our 2 years that we were a part of National American Miss!

When our National American Miss Arizona, Nicole Burdick, who is a student at ASU and has aspirations of becoming a broadcast journalist, was recently given a unique broadcasting assignment, she asked for the help of one of her sister queens. Nicole, who was given an assignment by her professor to complete "a film personality profile" story, just like a real journalist...she immediately thought of the biggest personality she knew - her sister queen, Miss Arizona Jr. Pre-Teen, Amber Cochran. For this story, Nicole took a look into Amber's pageant experience and why the NAM system defeats the stereotypes of pageants. Check out Nicole's project below...oh, and she got an A+ on it!

Check out this video interview by a Northwestern University Reporter on Peyton Newman - National American Miss Jr. Pre-Teen & her literacy campaign with Bookworm Angels!!
WE ARE SOOOOOO PROUD OF PEYTON!
No comments: