Our reigning National American Miss Wisconsin Junior Pre-teen is no ordinary girl. After losing her father in a car accident just prior to her birth, Erica Barlament has made it her mission to allow her father's memory and unselfish nature to live on.

She has also helped to continue to give the gift of life by promoting organ donation awareness. This is something her father did throughout his own lifetime. “Don’t put it off, because you might not be here tomorrow. You never know what might happen.” That’s something Erica’s Father would often tell her mother Kari, urging her to sign up for organ and tissue donation, “just in case.”

Despite the loss of a loving father and husband, in time, Erica Barlament, along with her mother Kari, were determined to make something positive come from this horrible tragedy. Something that would carry on more than just Eric’s name. They have done just that.

Erica has done an outstanding job promoting organ donation awareness and, as a result, has helped to continue to give the gift of life to those in need of organ donation. Working passionately to carry on his legacy of giving, Erica had the privilege of decorating the donate life float in the famous Tournament of Roses Parade, held in Pasadena, California this past year.
Erica and her mother Kari were also asked to speak at the Donate Life gala, where Erica was honored to give her National Spokesmodel winning speech, and to introduce the tournament of roses queen and court—all of this, in front of 514 people! What a confident and fearless young leader she is! She inspired many people to make a difference by becoming organ donors, and even received a standing ovation. 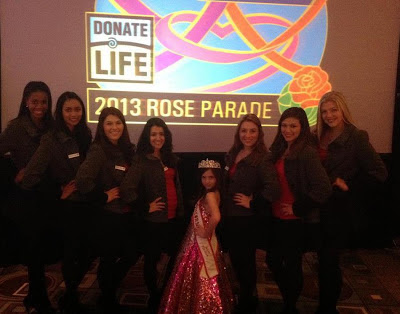 Erica plans to give as many speeches as possible, to promote the importance of organ and tissue donation as much as she can throughout her reign as our National American Miss Wisconsin Junior Pre-teen. Erica believes that the power of positive energy is contagious and it only takes one person to make a big difference in someone’s life. She is right. Just look at what an inspiration she herself has been to so many!

To learn more about Erica’s impact on the organ donation community, click here to read the article featured in The Brillion News about all of Erica's heartfelt volunteer efforts. Or, hear Erica herself tell you about her passion for spreading organ donation awareness:

The radio show is called Fashion Forward, and explores a variety of topics, like what’s hot and what’s not in fashion, as well as the latest trends-- including discussions on hair and nails and of course shopping!   They also use their excellent communication skills to interview professionals in the fashion industry, such as clothing and jewelry designers and hair and make-up professionals.

Listen in and join these NAM girls as they follow a journey on the path to designing their own clothing line.   Fashion Forward airs live every Wednesday at 4 PM Pacific Time on the VoiceAmerica Kids Channel. The webpage for their radio show can be reached by clicking the following link:

Illinois Queens-for-a-Cure Volunteer for a Noteworthy Cause


This past weekend, our Illinois Royalty participated in the "Making Strides Against Breast Cancer Walk" event at the Chicago Premium Outlet Mall. These fabulous ladies helped raise money for a great cause that will surely help many battling breast cancer in the future.

National American Miss has taught these young ladies a number of things. Not only have they developed an overwhelming sense of self-confidence, but they have also realized how meaningful it can be to give back to their communities, whether it be a result of donating money or a result of donating their time.

Helping others is one of the best feelings in the world and our Illinois Queens-for-a-Cure did just that. This is a great group of young leaders that will surely continue giving back to their communities in the future!
No comments:

Former National American Miss contestant, Marissa Hitt was recently featured on Kansas City’s major news network, KC TV 5 for her ability to spread joy through her artwork. A link to the article on the news networks website is listed below. Here is an excerpt from the article featured on KC TV’s webpage: 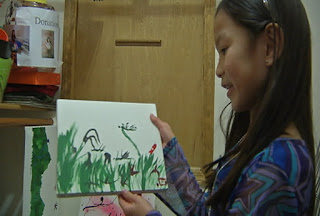 SHAWNEE, KS (KCTV) - A little girl is trying to bring artistic joy to others, all the while remembering where she came from. Hidden potential and unlocked talent are things we all possess. But some of us don't tap into that potential until later in life, while others take advantage of it before the first grade.

While some artists attack the canvas, Marissa Hitt is serene and peaceful with her paint brush.


"I'm just pretty much letting the brush do its work," she said.

She's been painting since she was 2 and she excels at it with carefree abandon. "I just do whatever pretty much," Marissa said.

Her art studio is in the basement of her parent's Shawnee, KS, home. It's here where she creates her gallery, so-to-speak, is in an upstairs closet.

"I have no idea (how many there are). A lot. And this one is dragon flies playing hide-n-seek," she said.

Maybe you've seen Marissa's work at local art shows. She has her own website where she sells her originals and prints. But Marissa said it's not about making money, it's more about donating some of the proceeds to charity.

Marissa's mom and dad , Terri and Dennis Hitt, adopted her from an orphanage in Leizhou City, China when she was a baby. The 8-year-old is well aware that children who remain in that orphanage live in meager surroundings.

"She wanted to send items to her orphanage in China," Dennis Hitt said.

"And I thought they need a little something of what I have and they can have fun and just create," Marissa said.

But Chinese officials suggested she send diapers or formula instead.

"She was 5 at the time and she said 'No!' She said, 'I want to know how many children are there that are 5 and older,' then she put together a list of things she wanted sent like books and art supplies - things in her words that she wanted those kids to have, things that they couldn't have that she was fortunate enough to have," Dennis Hitt said.

Painting is just one of Marissa's interests. She said dancing is her passion and she studies ballet and traditional Chinese dance. She was even named "Miss Shawnee" at the National American Miss Pageant.

"It's just been amazing to watch her and to know that I didn't know that piece of my heart was missing and now she's here and she fills it completely and it's not because she paints or dances - it's because it's her," Terri Hitt said.

Marissa said when she grows up she wants to be an international dancer.

Learn more about this outstanding former NAM girl by clicking the link below:

Email ThisBlogThis!Share to TwitterShare to FacebookShare to Pinterest
No comments:

Former NAM Girl Continues to Inspire Others Through her Heartfelt Work

NAM Girls amongst many, many others, have been inspired in recent years by Jordan Somer. Jordan has been a state finalist, a queen, and a loyal member of our National American Miss family for years, and we were exceptionally proud of her when we got word of her idea to incorporate the Miss Amazing Pageant in 2007.

We certainly weren’t the only ones to catch word of Jordan’s unwavering commitment to giving back to a community that gave her so many skills growing up. While her NAMily (as we like to call it) and others from the National American Miss community were eager to help her support her noteworthy cause, so was another significant organization.

Nickelodeon heard of Jordan’s outstanding commitment to better her community and awarded her with Teen Nick’s HALO award, an award notorious for recognizing deserving teens that are philanthropic leaders in their communities. 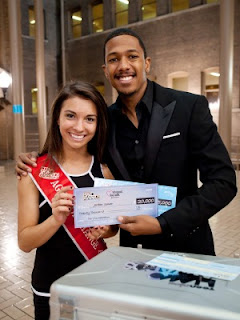 As part of Nickelodeon’s TeenNick Halo awards, TV star and rapper Nick Cannon also recognized Jordan for her work with the Miss Amazing Pageant at her school and she was awarded a sizeable scholarship to help make sure she could continue with her heartfelt efforts to better her community in the future—and she has done just that.

While this all took place a mere two years ago, Jordan has continued to flourish and follow her passion through her work with The Miss Amazing Organization. What started out as a pageant, held in one state, with 30 participants, has become much, much more. To date, the Miss Amazing pageant has raised over $50,000 and 750 pounds of food for the Nebraska community. The mission is now spreading nationwide with 11 state pageants being held spring/ summer of 2012.

You can help Miss Amazing Pageant continue to spread the love of a former NAM girl and help empower these beautiful people. The Miss Amazing Pageant is always looking for buddy volunteers to be a part of this amazing experience for their contestants. You can find information on how to be a part of the Miss Amazing organization (through volunteering your time as an escort, or as a buddy) on their website, by clicking the link below. Clicking on the link below allows you to register to become a buddy and/or mentor for some of the most amazing ladies. Volunteers will become not only contestants’ buddies for the pageant, but also their heartfelt friends. The experience is sure to provide both volunteers and contestants with wonderful memories for years to come.

Girls like Jordan truly embody the spirit of what National American Miss is all about, and we can continue to admire and support Jordan by following in her footsteps and volunteering our time to help fulfill her heartfelt dream. For more information on how you can be a part of the Miss Amazing volunteer experience, visit the official Miss Amazing Organization website by clicking on the link below: