Jessica Simpson Tween Line will be marking its debut with a fresh face...a NAM face!

I must say I am a FAN of Jessica Simpson's fashion line...her shoes are to die for!! So, of course I thought it was super cool when on Friday, I found out that she was teaming up with her sister Ashlee and debuting a Tween line....perfect attire for any NAM fashionista!

However, I REALLY got stinking excited when I found out who the new f
ace of the line will be...Kaylyn Slevin...2 time from NAM titleholder and National Model and Photogenic winner....who has since signed with FORD in LA. (pictured on the Left after her NAM IL Jr. Preteen win)
Kaylyn, along with one othe spunky girl will be the face of the Simpson's Tween Spring/Summer 2012 line, being featured on billboards, ads, catalog, internet, in store signs, print - you name it!
But, for Kaylyn - she told me the coolest part of the experience was spending the day with Jessica and Ashlee Simpson...and their mom Tina...and getting a first glimpse of all the SASSY clothes that will hit department stores like Macy's this fall! Check out this behind the scenes pic of the photoshoot! 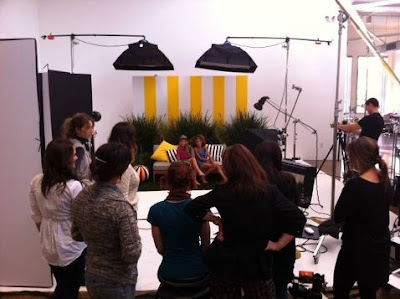 Q &A: Former NAM National Titleholder captures Teen USA crown...says it's all because of NAM!

The Miss Universe Organization, owned by Donald Trump & NBC, is a sister pageant to Miss USA & Miss Teen USA, which are pageants that National American Miss girls across the nation venture into once they have aged out of the National American Miss pageant system.
Unlike NAM, they do have a swimsuit competition and it's contestants age up into the late 20's. But like NAM, they believe in reinforcing self confidence in young women. And like NAM....we share many of the same titleholders!
Currently, the Miss Universe Organization is holding their state pageants across the nation, where new state winners are crowned and will venture on to the live telecasts for their respective national titles and the opportunity to work for Donald Trump.
Last week was the Miss Nebraska USA & Teen USA pageant. Sarah Summers, our 2009 National Jr. Teen queen captured the crown and has a new title to her belt - Miss Nebraska Teen USA 2012! 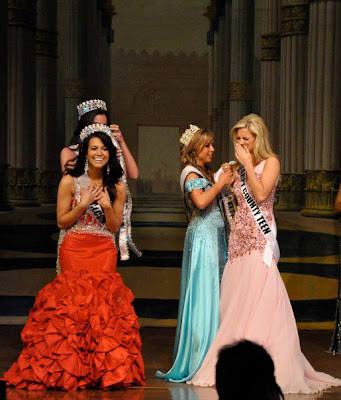 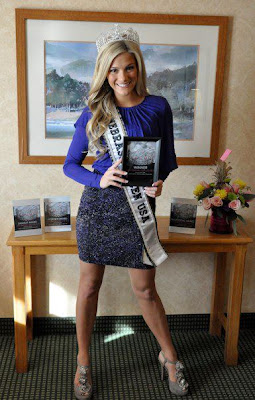 The following morning, after having a night to soak it all in - Sarah poses with her awards - photogenic winner, interview winner, swimsuit winner, and Miss NE Teen USA 2012
After Sarah was crowned, I had a chance to catch up with Sarah and here is what she had to say!
NAMISS ROCKS BLOG: Congrats on your new title. So proud of you!
SARAH SUMMERS: Thanks! It's all because of you guys at NAM!
NAMISS ROCKS BLOG: Well, then how would you say National American Miss prepared your for Teen USA?
SARAH SUMMERS: National American Miss was my first pageant ever and helped prepare me for everything I've done thus far in my life. After winning the National American Miss Jr. Teen title, I traveled a lot, did speaking engagements, made appearances, modeled, and even judged other pageants. This has all helped me become more confident and more comfortable which always shines through and I think it really helped me as I competed for NE Teen USA. To have the NAM experience and the support of my NAMily was amazing!
NAMISS ROCKS BLOG: What is your favorite part about competing in pageants?
SARAH SUMMERS: For SOOOO many reasons. All the amazing friends I have met across the country, the endless opportunities they have provided me with, and how much they really help with life skills, mostly confidence. 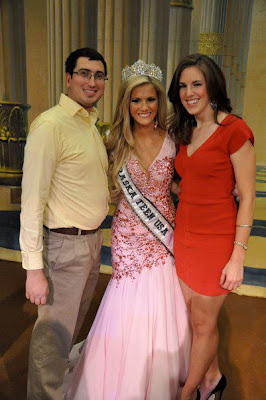 There to cheer Sarah on was NAM Team Maples emcee, Ashley Spingola & official NAM photgrapher/videographer, Brandon Rich
Speaking of NAMily.... Sarah was even crowned Miss Nebraska Teen USA by the EXACT same girl, Madison Novak, who crowned her as our NAM Miss Nebraska Jr. Teen in 2009! 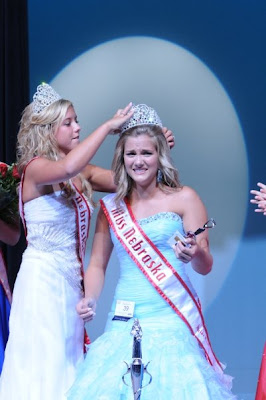 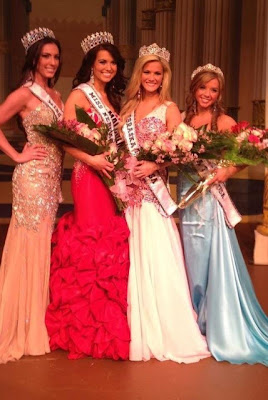 Team Maples girls, 2012 is right around the corner! We just send out special discounted offers to all of you for the 2012 season! Below are the Official Team Maples 2o12 Save the Dates and be checking your mailboxes....see you in 2012!!! 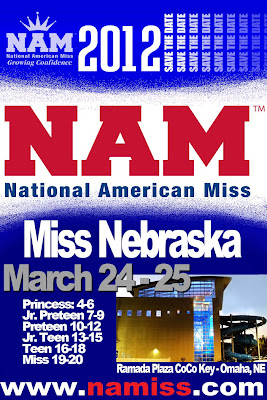 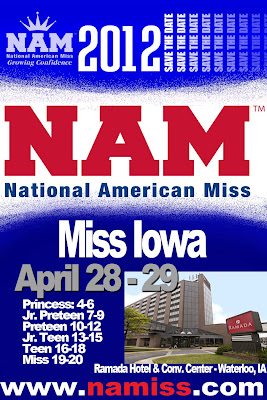 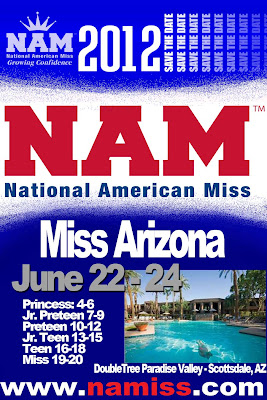 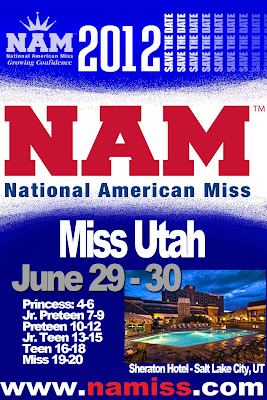 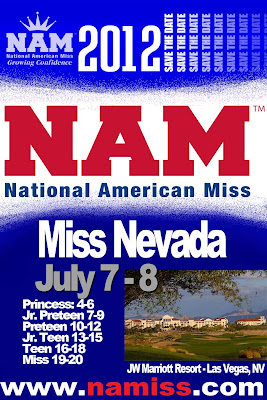 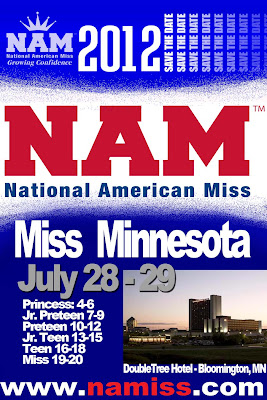 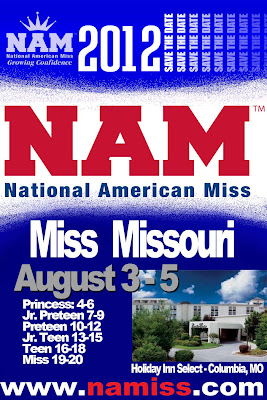 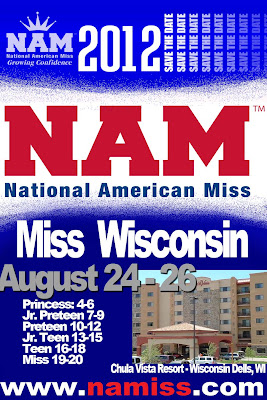 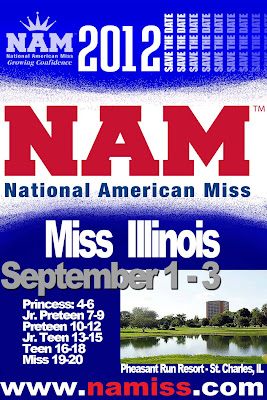 For a list of ALL 2012 NAM state pageants, visit the OFFICIAL NAM site HERE!
No comments: 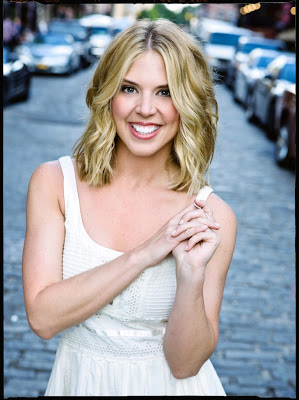 Sooo...since we are gearing up for NATIONALS, I thought I would better acquaint those of you who have not attended Nationals to our National Emcee and Entertainer, Joy Suprano. And for those of you who have attended Nationals, you will find this super exciting!
Joy, a former Miss Pennsylvania herself, has been a part of the NAMily since it's inception and is making quite the name for herself in NYC, gracing tv and movie screens across the globe.
Recently, in promoting her new role on HBO's How to Make it in America - Joy was interviewed by the Herring Bone Sports News.
Thought I would share with all of you. Like I said, If you know her, read on to know her better and if you don't know her yet - you will!
Click the logo below to read her interview!

Straight from the Silicon Valley MercuryNews.com....

"Jada Newkirk equates her pageantry experience with summer camp: A long weekend filled with lots of organized activities and time to socialize with fellow participants." 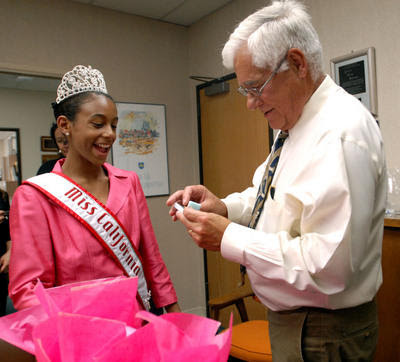 To read more about Jada Newkirk, 2011 NAM CA Preteen, her NAM experience, and how she recently recieved a pin of the key to the city from the San Mateo mayor, John Matthews - visit here. Also, unlike some media outlet - you can comment on the article yourself and give shout-outs, congrats, and personal messages to Jada!
http://www.mercurynews.com/san-mateo-county/ci_18832722
Read on fellow NAM girls....read on.....
No comments: 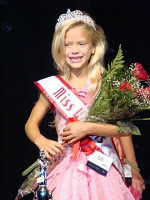 Sooo...was flipping through the channels and saw Kaylyn Slevin on the Orbeez Soothing Spa commercial airing on the Nickelodeon Channel. After talking to Kaylyn, I verified it was, in fact her....and added that she "totally owes everything to National American Miss" for being where she is today! Sooo...cool!

Kaylyn is a former 2 time NAM titleholder and National Model winner. Since her NAM experience, she has signed with Ford Models and is one busy girl! This is just another "day on the job" for Kaylyn.
And if your looking to add Orbeez to your Christmas list, no Kaylyn can't get you any for free....but you can check out all the cool Orbeez products HERE!

TO see some of the other cool stuff Kaylyn has done, CLICK HERE
No comments: 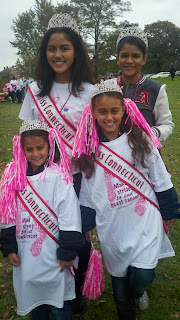 NAM Team Connecticut is passionate about performing community service and Making a difference is a hobby for them and shined recently on the news. For their 2012 news debut, the girls were active volunteers for the American Cancer Society "Making Strides Against Breast Cancer Walk." The 5K walk was held in Hartford, CT on October 23, 2011. Many of the girls have been volunteers for this organization since 2005 raising funds to find a cure a breast cancer, raising awareness and education and supporting cancer survivors....and love being able to continue their involvement in this wonderful organization as state representatives!
No comments:

I LOVE PARADES....and so does Miss Iowa Teen!

My favorite part about being royalty is being in parades. Nothing feels more royal then riding in the back of a float or a convertible with your crown and banner and waving to spectators and little girls wanting their picture with you! It's sooo cool.....recently Miss Iowa Teen, Jenny Jones, experienced her first parade and loved every minute of it...check out that smile! How excited is she 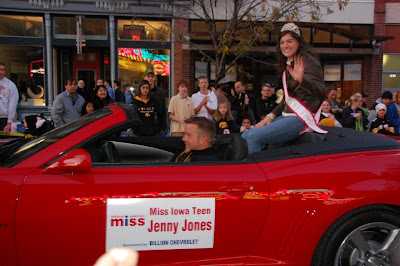