Nebraska State Finalists, you are WORTH IT!

WHAT A WEEKEND!!!! The Nebraska Pageant was a HUGE success and it was so wonderful to see every participant grow in confidence and skill! A few of my favorite parts of the NAM State Competition are seeing how proud the parents and supporters are as they watch their contestant grace the stage, and the new addition of our "I am Worth It!" Retreat. At every Team Ewing State Pageant this year our Mentors will host this "I am Worth It!" Retreat for each of our age divisions. Our Nebraska State Finalists were all amazing and it was so fun to get to know each and every girl! During the retreat each girl was asked to write a word that describes them on their "I am Worth It!" mirror given to them. I don't want to give away ALL of the fun things we do during this time, but I wanted to post the video featuring all of our Nebraska State Finalists, and show their inspiring smiling faces! Congratulations to all of the ladies on a job well done this past weekend. You were truly amazing, and I can't wait to see all the big things that you will accomplish!

Iowa Open Calls are coming up FAST, and we are SO excited! These Open Call Sessions are free to attend and the first step in the National American Miss experience.

You can become a part of the #1 Pageant in the World! Register today to attend a Miss Iowa Open Call to find out how NAM can help you achieve your goals and gain self-confidence...and how you can take home your share of $1.5 million dollars in cash, scholarships, and prizes...including a BRAND NEW FORD MUSTANG CONVERTIBLE!!

Our National American Miss Mentors and I can not wait to meet all the beautiful young ladies from across the great state of Iowa! Below are the date and location options!


Register at http://www.namiss.com/iowa/ and use Invitation Number: BLOG 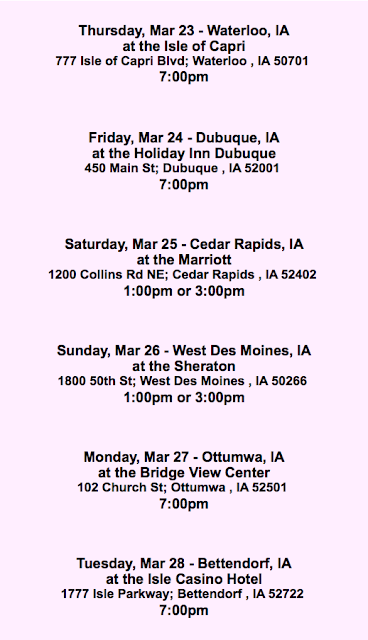 It was five years ago that the wheels started turning on a project that now consumes your current Miss Minnesota Junior Teen Grace Myler. At the ripe age of 15, she (with the help of her mother) will open a new {free} clothing boutique for teenage girls.


Threads for Teens was started by a California girl whose mission has now expanded to serve teens throughout the country. Grace reached out to the organization five years ago, wanting to be a part of it. Years later, she became one of four teens selected from throughout the country to begin the process of opening up a pop-up boutique. “I am now very proud to say that we have had six pop-up events and have provided new outfits to close to 100 girls in Minnesota,” said Myler.

Grace will now bring her mission to Shakopee, Minnesota. “I’ve lived in Shakopee all my life, so naturally this is the community I want to invest my time,” said Myler. “The timing was perfect and it’s incredible how it all has come together.” Myler will set up shop in donated space at the Shakopee Public Schools District Office. “We are going to do great things out of that space,” she said.

Threads for Teens serves girls ages 13-21 who are in foster care, at risk, in homeless situations or come from low-income families. The girls can be nominated to participate in the program by adults. The nominating adult will fill out paperwork and then once completed, Threads for Teens will contact that adult and set up an appointment. All visits to the boutique are by appointment only.

To celebrate the new venture, on Friday, March 10th, Threads for Teens will host an open house from 2-7 p.m. at their location inside the Shakopee Public Schools District Office (1200 Town Square in Shakopee, next to the Dollar General). To learn more, see below, or contact Grace or her mother Katie at 952-564-0705. 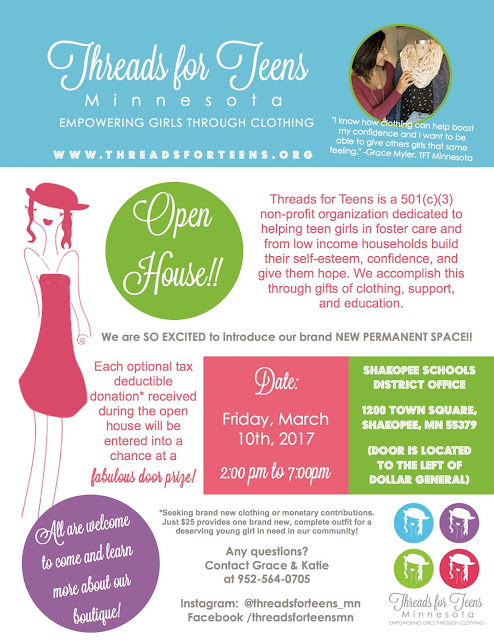